” A one-in-a-million talent…possessing an energy and freshness that’s dazzling…patently brilliant…Hosford’s singing and playing put him near the top of his profession. ”
New York Post

” Wayne Hosford performs with such compelling intensity and verve that he gives a new definition to the endangered genre of cabaret singer…Hosford is the consummate storyteller; an articulate, intelligent actor who happens to sing and accompany himself on the piano brilliantly…after the opener, he commanded the house. ”
Charleston Post and Courier 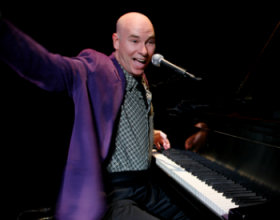 ” I’ve never been so excited by a new talent in my life. ”
Back Stage

” Hosford Wows Colony Crowd…a singer and pianist extraordinaire…nothing if not versatile…moving from the sublime to the hilarious…amazingly inventive…a stirring performance…the evening was a delight!”
The Palm Beach Daily News 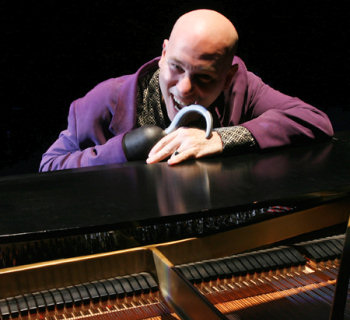 ” Hosford’s improvisational skills are astounding…an innovative musical mind…with a wicked sense of humor…and whether he’s winging a comic opera in which he sings all the parts himself or even doing a stand-up monologue, he’s absolutely original and screamingly funny. ”
Agent & Manager

” Hosford displays a keyboard wizardry that obviously reflects considerable classical training. Too, proving himself even more of a threat, he has an excellent singing style…the finale made for a hushed moment that riveted the enrapt audience. ”
New York Native

” A superb singer/instrumentalist…it’s pure pleasure to be able to sit back and just enjoy…an unequivocal delight…Hosford is so adept with Peter Allen’s poignant music and lyrics, that many of those who did manage to squeeze into Steve McGraw’s saw him as the perfect keeper of the flame. ”
CAB Magazine

” Hosford could be the next Danny Kaye if he has a mind to. ”
Performer’s Cues

” Whether singing or playing, this young man is a striking talent. ”
Coral Gables Times/Guide

” Milo O’Shea, Kitty Sullivan and Wayne Hosford form an unbeatable trio…Hosford is particularly good as the title character from The Playboy of the Western World. ”
Vineyard Gazette

” Pianist/singer Wayne Hosford grounds the show with fluid, expressive piano and a jaunty singing style. When he says he’s having some fun up there, you can believe him. ”
Miami New Times